filter, sort and compare photography and film making equipment using one of our discovery tools

Here at Action Camera Finder we keep tabs on the latest goings on in the action camera, gimbal and camera drone industries, there are always speculation to new hardware used on the latest releases, 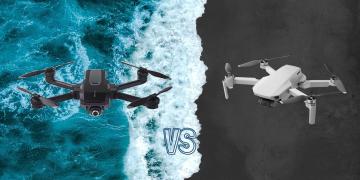 In this article we compare the specs and features of the DJI Mavic Mini and the Yuneec Mantis Q camera drones.

In this article we compare the specs and features of the DJI Mavic Mini and the Xiaomi Fimi X8 SE 2020 camera drones.

In this article we compare the specs and features of the DJI Mavic Mini and the Hubsan Zino Pro camera drones.

You can compare these two drones in more depth at our one of a kind drone comparisons tool, filter film making drones to narrow down features you want in an aerial photography drone and much more.

The Hubsan Zino Pro is an updated version of the Hubsan Zino and it is nearly impossible to tell the difference between the two, but there are a few differences and we'll compare these to the incredible little DJI Mavic Mini.

Both of these drones are about $499 and actually came out at the exact same time, at the end of 2019.

Down to the specs there are some small and large differences starting with the small.

That is the size of the DJI Mavic Mini, it is tiny and diagonally measures 213mm across, where as the Hubsan Zino Pro measures 317mm diagonally, an extra 10cm in length when folded up.

The weight difference is also significant with the Mavic Mini weighing in at 249grams and the Zino Pro being nearly three times the weight at 709 grams in total, ready to take off.

The Mini has a better field of view at 83° compared to 80° of the Zino Pro, so if you're looking at the biggest field of view possible, the Mini is your camera drone of choice.

Considering it's size, the Zino Pro is only slightly faster than the Mavic Mini, with the Zino Pro having a top speed of 59kmh and the Mini being capable of 46kmh.

The Zino Pro is let down by its 23 minute flight time and 180 minute charge time which gives it an uptime score of 11 out of 100.

The Mavic Mini has a fantastic 30 minute flight time and a shorter 90 minute charge time and can also be charged by USB with a powerbank so this gives it a much higher uptime score of 25/100.

When looking at the theoretical distance each camera drone can fly, they are pretty much identical at around 23km for the Mini and 22.6km for the Zino Pro. This is worked out by taking it's top speed and flight time to get its distance.

They both share the same size image sensor of 1/2.3" but we don't believe they have the same sensor.

Most of their video recordings are pretty similar, both can do 1080p at 60fps and are 2x slow motion.

They both save JPEG photos, no RAW capabilities and H.264 and MP4 video files.

The Zino Pro has active track whilst the Mini does not and they both stabilize their footage with a 3-axis gimbal.

The Zino Pro is a small upgrade to the Hubsan Zino and is a fantastic budget option, if 4K is your thing and you don't mind the extra size or weight, it's hard to beat.

If you want a simpler, more portable camera drone and don't require 4K video recording, then the DJI Mavic Mini is definitely for you.