In this article we compare the specs and features of the DJI Mavic Mini and the Xiaomi Fimi X8 SE 2020 camera drones.

You can compare these two drones in more depth at our one of a kind drone comparisons tool, filter film making drones to narrow down features you want in an aerial photography drone and much more.

Two very competitive looking drones on the face of it, both coming in between $400 and $500 brand new depending on where you buy them, if there is a sale or not.

Other than price and where they are made, these two drones are very different.

Both relatively new film making drones at just over 6 months since it's release for the DJI Mavic Mini and the Xiaomi X8 SE 2020 currently being released as pre-orders are sent out around the world.

As you would guess, when folded up, the diagonal size of the Xiaomi Fimi X8 SE 2020 is slightly bigger. It's dimensions are much bigger in general, being higher and wider than the Mavic Mini and thus, making the volume of the X8 SE 2020 well over twice the size.

This is respected in weight as well, with the Fimi X8 SE 2020 being almost exactly three times the weight at 765 grams, compared the the well known 249 grams of the Mini.

You get a slightly wider field of view on the DJI Mavic Mini by 3 degrees, compared to the 80 of the Fimi.

If you're after a faster film making drone, the Fimi X8 SE 2020 is almost 20kmh faster, which is rapid in comparison to the Mavic Mini.

This is also represented in the ascent and descent speeds, each being 1kmh faster.

This comparison seems to be working in halves and doubles, this time with the transmission victory going to the X8 SE 2020 camera drone at a max transmission of 8km.

This is handy as you may be further away with the drone when filming and you can get an extra 5 minutes out of it compared to the DJI Mavic Mini.

This is a common size in action cameras, drones and cameras on smart phones. This does not mean it's better though, image sensor size has positives and negatives depending on what you want to do with the camera and the tech that is partnered with it.

They are both 3-axis camera drones and both amazing cameras from what we have seen and tried so far and the last comparison is that of sensors.

The Mavic Mini comes with GPS but you get optical flow, GPS, GLONASS and BEIDU with the X8 SE 2020 which means better satellite positioning and this should affect other features like tracking (which you get with the Fimi and not with the Mavic Mini) and return to home, etc.

The Mavic Mini has a total volume of 1176cm³ and a combined weight of just under 500 grams.

The Xioami Fimi X8 SE 2020 has a total volume of 2405cm³ which is a smidge over twice the volume and 1135grams combined weight of drone and controller.

This may seem large, but comparing that to most other camera drones on the market, this is a fantastic size and makes the Fimi X8 SE 2020 a fantastic offer in terms of portability yet still having a solid flying platform in higher winds.

They both take 12mp photos and each have a host of photo modes to take advantage of.

Continuing on with the photography features, you get full RAW photography modes and DNG photos out of the camera drone which means that you'll get bigger image files and more options for editing and saving over exposed or under exposed photographs.

Same with the video footage, you have the options of H.265 and F-Log with the X8 SE 2020 which means this drone is definitely more capable as a film making drone compared to the Mavic Mini which has MP4 video files and no cinelike, d-log or raw video formats being saved.

If video quality, or at least size of video files are important to you, the bitrate is more than double on the Xiaomi Fimi X8 SE 2020 at 100Mbps, similar to a lot of other 4k capable camera drones.

If you want a pocket sized camera drone for film making, the Mavic Mini is a solid choice, but watch out for high winds and obstacles.

The Fimi X8 SE 2020 is still very new and we're still learning about it, but it looks like a fantastic budget option for budding new film makers who want to give drone photography, aerial photography and film making with a drone a go.

Find cameras, drones and gimbals based on specific features you want in your film gear, not what you don't want!

In this article, we compare the specs and features of the DJI Pocket 2 and the Morange M1 (Xiaomi TikTok) action cameras. 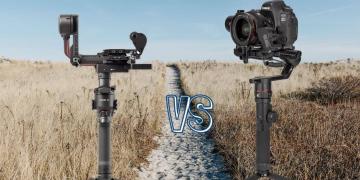 In this article, we compare the specs and features of the DJI RS 2 and the Manfrotto MVG 460 3-axis camera gimbals. 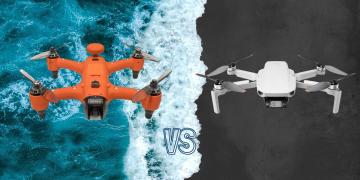 In this article we compare the specs and features of the DJI Mini 2 and the Swellpro Spry+ camera drones.