The best action cameras for spearfishing are cameras that you can firstly mount to yourself or your speargun. If you would like to record footage of your dives, underwater hunts and gathering then you're in the right place. We have years of experience with underwater photography, freediving, snorkelling and spearfishing and have selected a few features that every spearfisherman would like in their camera.

There are many other features that you may personally want, automatic white balance change during your dive so that you don't lose the colours in your videos, or you might not require a screen because you're connecting it to your body or on to a rail of your gun, you can check out the full list of action cameras at our table, or at a simplified version, or check every action camera we have in our look-up grid too.

The list has been filtered from over 100+ action cameras in the directory by first, depth. Every camera in this list can go to at least 20m/66feet deep with an underwater case protecting the action camera.

Secondly we have set it to cameras that only show a field of view of at least 140degrees. To put this in perspective, the GoPro's and other action cameras can record in super wide views of 170degrees, so with 140 we think you will get everything in shot that you want, the wider, the better.

We have also filtered the list down to only show cameras that record full HD 1080p and at atleast 60fps, so that you can get full high quality video recordings at a decent frame rate, so when the action starts and you're recording, you can be sure that you'll capture it and can even slow the footage down a little in post if you require.

You will also notice that you can sort the ranking list by battery length and price, as well as the cam score. If you're in the water for a full day, you'll want to be able to record for as long as possible, just sort by battery life and you'll have the action cameras showing at the top which have the best battery life.

Just remember, you don't need to get an action camera with a screen because you will be fitting it to your gun or a part of your body or even mask. This means a camera like the Sony FDR X3000 will be more than capable of handling footage of your underwater hunting and gathering. It doesn't have a screen but is filled with loads of great specs and features, has one touch record and because it's splashproof means that if you want to change the battery for long days out on the water, you can do this without risk of flooding it.

Just other specs and features to consider for when you're looking in to getting an action camera for spearfishing.

All of the action cameras here are waterproof ready, out of the box. Just make sure all the battery and port hatches and doors are closed and away you go.

We have ordered this list by those which can dive the deepest first without a housing and then in a descending order, up to a depth of 5m.

We recommend that you look for cameras which are 10m dive ready and deeper.

Have you ever tried looping mode for spearfishing? That way you can save only the best shots for your dives.

Here are a list of action cameras that can record loops of their videos and rewrite over them.

That means when you head home, you have two to three loops of 5, 10, 15, 20 mins in length instead of hours of footage when you only wanted a few minutes worth from the dive.

All of the action cameras below have looping mode as standard, but most will also require an external waterproof housing or case so that you can dive deep on your spearfishing adventures.

filter, sort and compare photography and film making equipment using one of our discovery tools 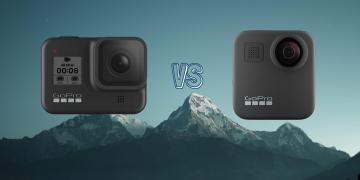 In this article we compare the specs and features of the GoPro Hero 8 Black and the GoPro Max 360 action cameras. 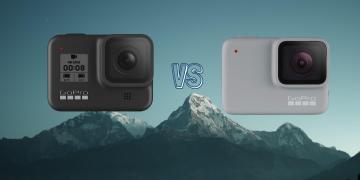 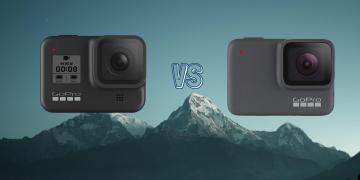